You are here: Home1 / Hareden and Ouster Rake

Puddleducks café at the start and finish. Other than that, it’s rucsac-fodder only, unless the snack van is operating in the Trough.

A wild and woolly tour of the southern Bowland moors, with several technical climbs, two exceptionally technical descents and one delicious swoopfest. Although not a long route (and never far from the start point) it feels quite serious in a couple of places and is not to be undertaken lightly or ill-advisedly.

1. Start at Dunsop Bridge, centre of the known universe. Head out on the Whitewell road and turn left.

2. Turn right at the bridge and climb on tarmac. Where the road levels out, turn right onto bridleway past farm buildings.

3. Bear right through the spooky wood then cross a high cattle-pasture which is often squelchy, so try not to carve it up. I once sat watching a family of young stoats gambolling in this field.

4. Whizz down a fast, grassy descent to Hareden Farm. Turn right to the road then left. Snack van may be on left at the bottom of the Langden valley.

5. Climb up through the Trough for 1½ miles then right onto a bridleway. This gets sketchy near the top, but head for the slight dip in the skyline and bear left when you reach it. 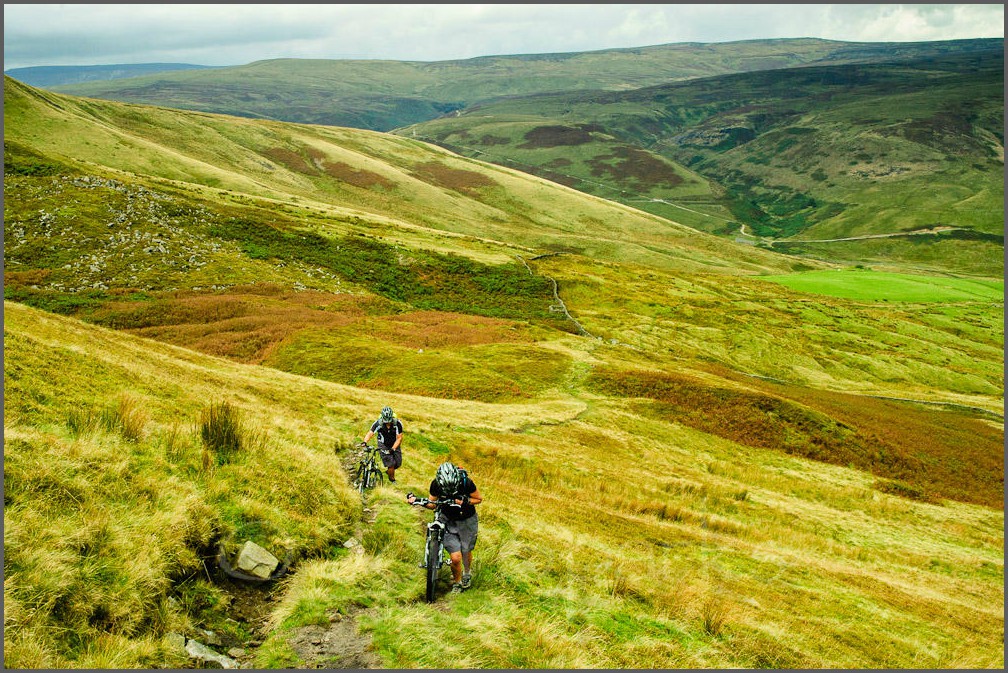 Mountain bikers push up the climb of Ouster Rake in the Forest of Bowland, Lancashire

6. You’ll now pick up a good track – good in the sense of easy to follow. Although it may be a tad peaty and it soon reveals a white-knuckle plummet down into the Brennand Valley with several awkward drop-offs and a worrying slope on your right. People have come to grief here – take it steady.

7. At Brennand Farm, there’s an opportunity to cut the route short by retreating down Whitendale. But, if your legs are still game, climb the zigzagging bridleway to a high moor, followed by a bucking descent that ends in a frighteningly steep test of how close you can get your derriere to your rear tyre.

8. At Whitendale Farm, make another climb onto Dunsop Fell. At the watershed a magnificent eastward vista opens up, including a juicy prospect of the descent. Follow this, bearing slightly right, dropping to a small stream.

9. At the road, turn right and follow lanes back to Dunsop Bridge.