You are here: Home1 / Hutton Roof

Not many opportunities, though there’s the Plough at Lupton.

Although this ride makes an evening spin or a consolation prize if central Lakeland is washed out, it is also a charming outing in its own right. This corner of Cumbria is massively overlooked in favour of the famous haunts but proves to be pleasant, rolling limestone country.

If you want to get the road section out of the way first (and save the highlight descent to the end) then start as close as you can to Holme Park Farm at 530474. 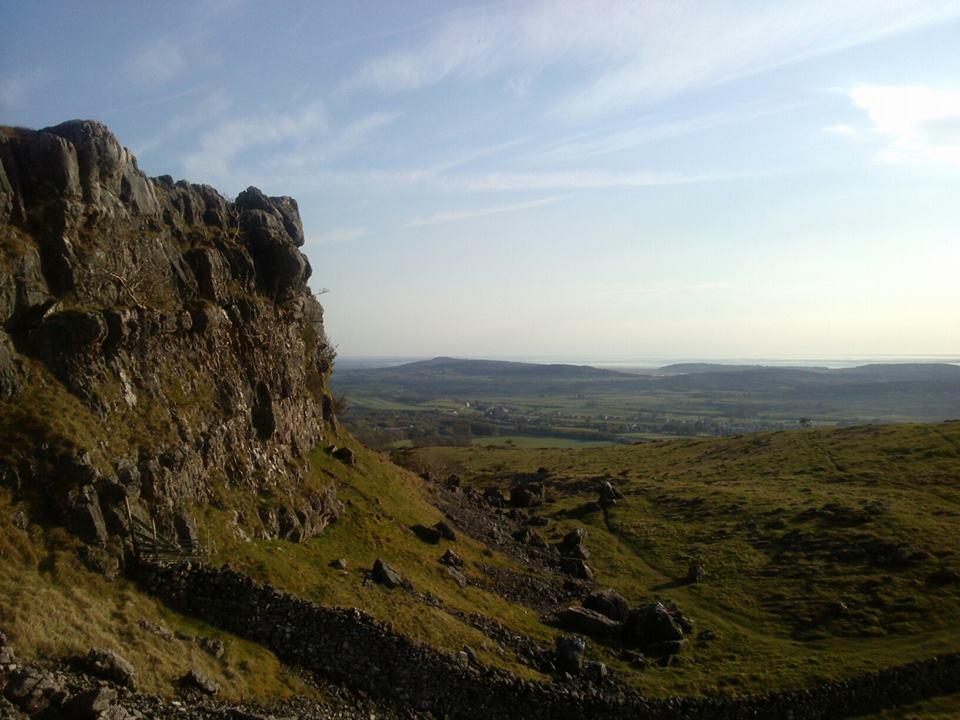 1. Mosey north on the A6070 under the imposing pudding-basin of Farleton Knott. Don’t worry too much about the urgent thrum from the motorway as you’ll be parting from it soon.

2. Take a right at Duke’s Bridge through Farleton. Ignore two lefts tempting you across the canal and also ignore a right fork into Puddlemire Lane then dink over Farleton Beck at Nook Bridge and fork left to join the A65 at Summerdale Nursery (MS on 1:25000 map).

3. Turn right on the A65 then soon left at the “VR” postbox. The road climbs slightly, past a house renovation project on the right. At the power lines, take the bridleway on the right.

4. Keep climbing, ignoring turns on the right and another bridleway joining from the left. Stick to broadly the same line, past a big ash tree (assuming it survives die-back) heading above a phone mast via a diagonal, gorsey wall with a small wind turbine on the left.

5. Now go through the roaming pygmy goats and pecking chickens of Lupton High, contouring to a huge meadow crank-deep with grasses in summer. (Parents will find themselves reciting the appropriate passage from We’re Going On A Bear Hunt at this point) Swish through this on a diagonal line, becoming defined at a gate with a tree stump at the bottom.

6. Enter a sunken lane with some stony sections and pass some horse paddocks to re-emerge on the road at the 107m spot height.

7. Go left on the A65 until you reach Thompson Fold and a bridleway on your right (when this ride was researched, this section was out-of-bounds due to some barn conversion work but there were bridleway signs at both ends so it should be navigable)

8. Emerge at Badger Gate with its tiny duck pond and boat house then turn right on to bridleway signed to Newbiggin. This is a narrow lane flanked by deep hedges and richly carpeted with buttercups, campion and nettles. This makes it a memorable section, especially if clad in shorts. Maybe it needs someone with chariot scythes on their wheels to strim it down a bit. At one point, you go over a funny undercroft (perhaps a sheep shelter?) underneath a gate.

10. After the house called Barrowdale, take the next left. If the bridleway sign is lost in elderflower, look out for the blue tape on the gate sign. After a lovely, slanting climb, ignore a right turn and drop slightly through Whin Yeats farmyard. Leave on the concrete farm road, turning right at the public road.

11. Turn right again at the Limestone Link sign. There are many forks, but aim just to the right of a limestone tor. Two gates appear ahead and the track becomes much better defined. Then finish with a flourish on a cracking descent furnished with rattlesome rocks to Holme Park Farm.