You are here: Home1 / Ratherheath

Best bet is the Watermill Inn at Ings. There’s also the Brown Horse at Winster later on.

Start Point: Scream Point at SD490961. Turn left just at the end of the short dual carriageway section. There’s parking either side of the lane.

There are many reasons why you should do this ride: if the higher hills are misted up, snowed up or rained off, if you only have time to venture a little way from the motorway or if you have someone in the party likely to be nervous on the harder trails. But the best reason is the simplest – it’s a beautiful ride. 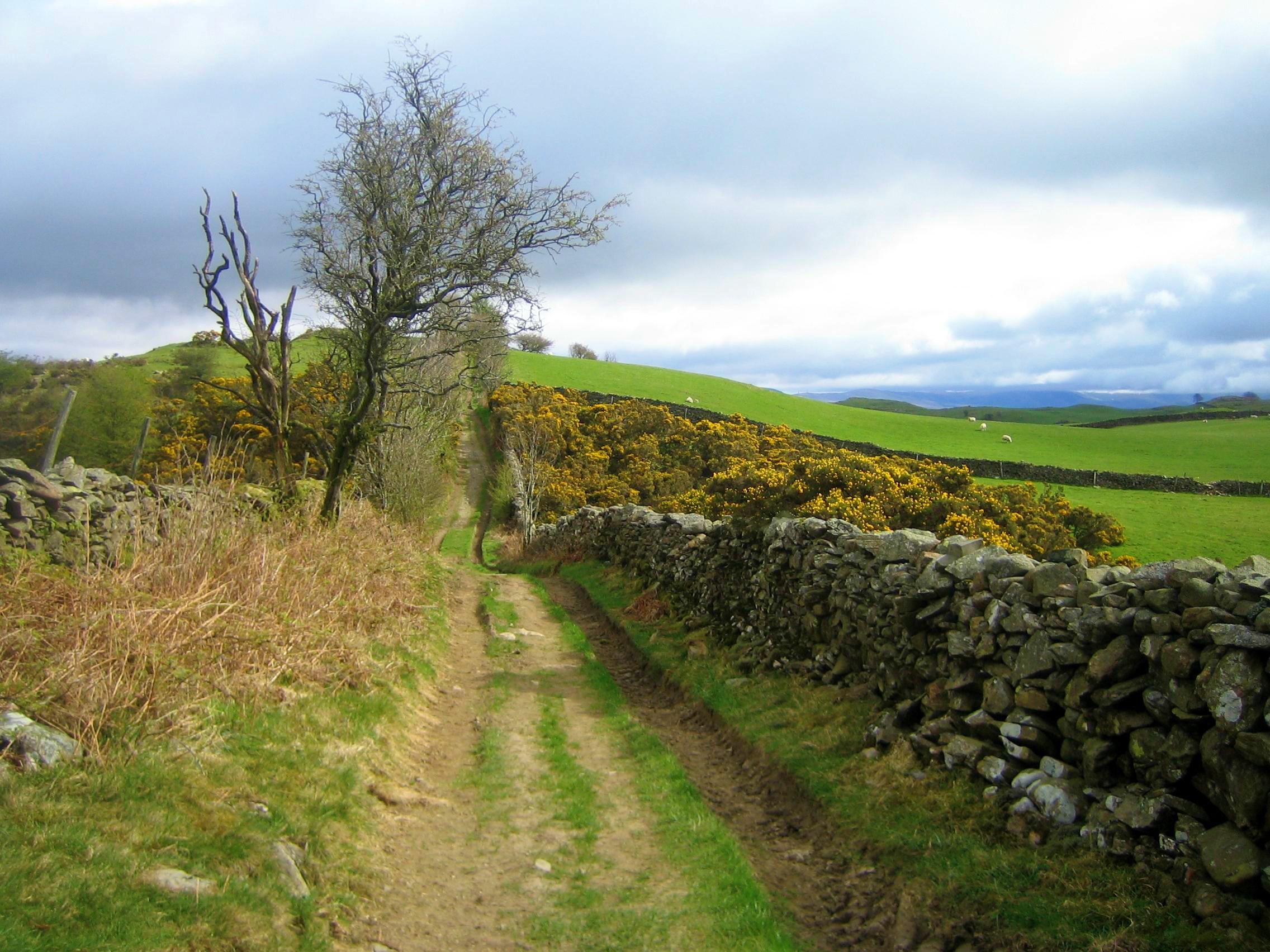 Come in springtime, when the sky is filled with curlew trills and jay cackles, while the landscape is a riot of primroses, daffodils and gorse, with blackthorn blossom lining the hedges. For a ride in between Kendal and Windermere, it’s surprisingly quiet.

1. Head off down the lane away from the A591. Fork left (Yellow sign “Holiday Homes”)

2. Fork right into the rough track at the Camping and Caravanning Club site. Go straight on at the end of the lane and join the Dales Way arcing round New House Farm.

3. Turn right at spot height 157 and rise past Fell Plain, forking left into the bridleway where the road levels out. Curve to the right round a small wood and join the road at Borwick Fold.

4. Turn left and follow the road, forking right near power lines. Go past Yews (old OS maps show a bridleway running north from here but it since has been demoted to footpath).

5. Where the road dinks left, turn right to Whasdike and go through the wood to join the gated road under the railway to Ings. The Watermill Inn is on your right.

6. Cross the A591 with care and head up Grassgarth Lane. Turn right at spot height 157 onto the tricky bridleway climb. Go past Heights Farm onto The Heights.

7. Follow the lane north then northwest, ignoring the lane to the right. At an unsigned junction, turn half right and keep heading northwest.

8. Follow bridleway signs towards High House, going through a gate with a huge tree stump raising a finger into the sky. Shortly after, turn right to High Borrans.

9. After High Borrans, turn left on the Ings-Troutbeck Road for a few metres and turn right. Then turn left at spot height 198. Ride south to re-cross the A591.

10. Zag right for a few metres and turn left on bridleway (NB the sign says it’s footpath after the railway, so cross the line with care and walk the few paces into the housing estate.

11. Head up to the left to pick up the byway heading south to Cleabarrow, taking care to close the deer gates and protect the community woodland.

12. Turn right on the B5284 for half a mile and turn left into Lindeth Lane. Head south, ignoring the green lane crossing the road. Join the A5074 through Winster and out the other side.

14. Turn sharp right at Thorneyfields then joint the road briefly at spot height 62.

15. Turn left onto bridleway at Bulman Strands farm. Zigzag up through the fields to Birk Moss and keep heading broadly east-north-east, veering right just before Crook Hall, with the tower of St Catherine’s church on the left.

16. Drop down to the road and head south past the golf course, turning left through Beckside farm. After the farm, the tracks branch out in manifold directions and become indistinct, but you need to pick up the strong bridleway heading north then north east to Capplerigg Lane. At one point the signage offers a bridleway on the right bur hold your course.

17. At the B-road, turn right then immediately left into Ratherheath Lane. Follow this to the end and the the start is just 200 yards down the A591 to your left.