You are here: Home1 / Whernside Loop

The reason I’ve suggested that you start this route from the Main Street, rather than the car park, is so that you can have a butty or beans on toast ‘Bernie’s’ cafe before you start. It’ll set you up well for what’s to come. Ingleton does have other cafe’s and pubs, and a very good Youth Hostel – still open! Along the route Dent has a wealth of small hostelries, many brewing their own ale – worth a trip for this alone. There’s also a couple of good cafes in the village. If you base yourself in the Ingleton area, you will definitely enjoy some great cycling – both mtb and road.

Let’s hear it for Whernside – the dumpy one, forever overlooked as the eye is drawn to the shapelier eminences of Ingleborough and Pen-y-Ghent. This ride describes a loop around the Cinderella hill, taking in some beautiful Dales scenery and a good variety of under-tyre surfaces. It has climbs to test all riders, and descents to live in the memory for weeks. Just look at the swooping green bridleway opposite, that leads you into picturesque Dent – just mind the sheep as you whizz past them! 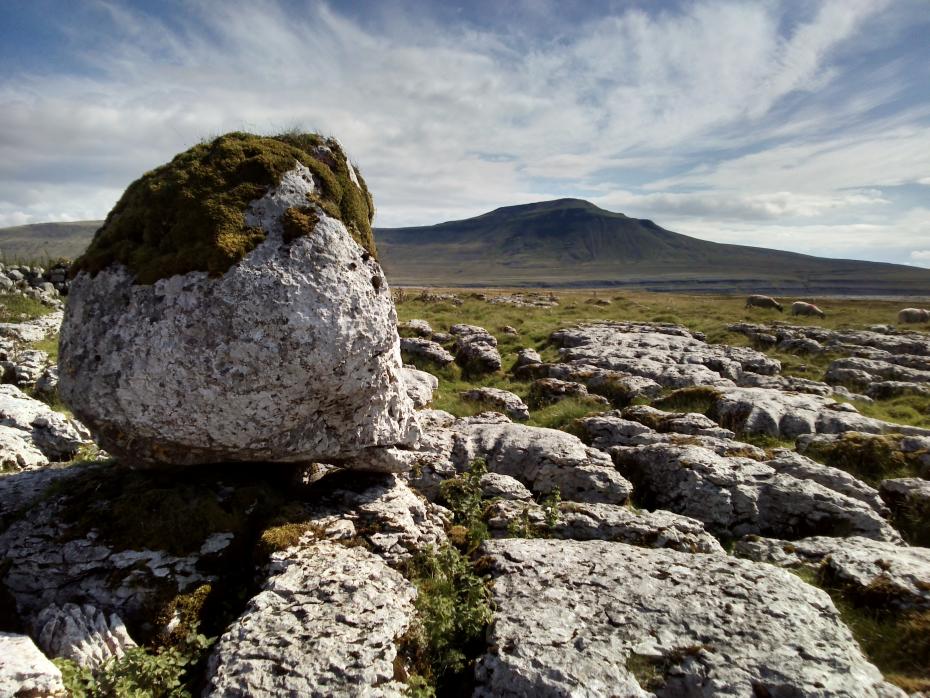 1. Start at Ingleton, with plenty of opportunities for last-minute carb-loading. Head west over a succession of bridges then turn right into Thornton Lane at the Marton Arms. Climb on tarmac with increasingly impressive views, over your shoulder, to the Bowland Fells and the sea. Ingleborough rules all on your right. The road soon levels out and glides into Kingsdale, with its prominent footbridge.

2. Go over the bridge – extra points if you can ride off it – double points if you can ride onto it. An easy path skirts Twistleton Scar End, but look out for two wooden posts marking a sharp left turn back on yourself. Zig-Zag pleasantly on grass up to Scales Moor, an elevated chequerboard of peaty turf and limestone pavement. Look out for, and don’t fall into, the Devil’s Sphincter.

Then see if you can pass the perched boulder without taking the obligatory picture of Ingleborough. Damn those attention-seeking hills. Before long, the trail starts to lose a little height but keep to a broadly contouring line, heading to the farmhouse of Ellerbeck.

3. Follow a string of farms on the same contour until a dink right at a packhorse bridge sends you down to the railway line and the lonely outpost of Blea Moor signal box. The “lonely” here is ironic because, whereas you probably found Scales Moor deserted, the next mile will be in the company of a million Three Peaks pilgrims flogging their way up Whernside. All of them will be amazed to see a bike scrabbling up the rocky staircase and eager to see what you can do without dabbing. No pressure, then.

4. Where the hordes turn left, we thankfully head straight on to the atmospheric ruin at ‘Boot of the Wold’. If you found the climb a bit of a dry gasp, the unfolding vista of Dentdale will soon have you salivating – a rocky trail plummeting into a scene of unsurpassed bucolic loveliness, topped by the smoky haze of Lakeland.

Let the bike find its pace but watch out for a couple of tricky rain gutters and a skittery hairpin at the bottom. Then swoop down lanes to Dent, quite possibly refuelling at the Stone Close cafe. Take on calories – you’ll need them for Flinter Gill.

5. The climb begins benignly enough. From Stone Close, cross the main street and head up the lane past the ‘Shop on the Green’. Then it gets steep, rubbly and, as likely as not, damp. A perfect blend of power and poise will be needed to get you up without sending all the stones rattling into the gill. Extra points if you can ride under the arching tree root.

Emerging from the woods with bursting lungs, turn left on the terrace path. Unfortunately the motorbike and Land Rover brigades have chewed this up, so what looks on the map to be a gentle cruise turns into a bit of a tussle. Even after a dry spell, some of the puddles are deep enough to sustain colonies of crocodiles.

6. Where the surface improves, it swings left and then right to join the Kingsdale road. Turn right to swoop down on tarmac and through a couple of gates.

7. At a slight dip with a stand of trees on the right overlooking a limestone ravine, turn right through a gate. There’s no way marker – just an “open access” sign on the gate. The slope features an unsympathetic combination of bunched contours, tussocks and thistles but if you head straight up to around 430 m (above the trees), you find a good track contouring left and then dropping a little.

8. Pass the rushing waters of Jingling Pot and keep south on the Turbary Road until a house at the bottom of a rattly descent marks a turn left onto Tow Scar Lane. All that remains is a fast descent on tarmac to spin the mud off your tyres. Hopefully, not all of it will end up on your face – but a grin will.