Corvara in the Dolomites

banner image by photosforyou on Pixabay.com

A Classic Road Cycling Route in the Dolomites

Emma Tang writes about an 80+ miles road cycling loop in the spectacular Dolomites in Italy, based on the classic sportive event the “Maratona dles Dolomites”.

My partner Grant and I have visited the Dolomites several times and our first day has often coincided with the super-tough sportive the Maratona dles Dolomites. I had often pondered whether or not I would be able to get round the long-course route (138km). Although having no desire to ride it on event day (9000 participants sounds like a nightmare to me), riding the distance appealed massively! Finally, in July 2015 we took on the challenge. 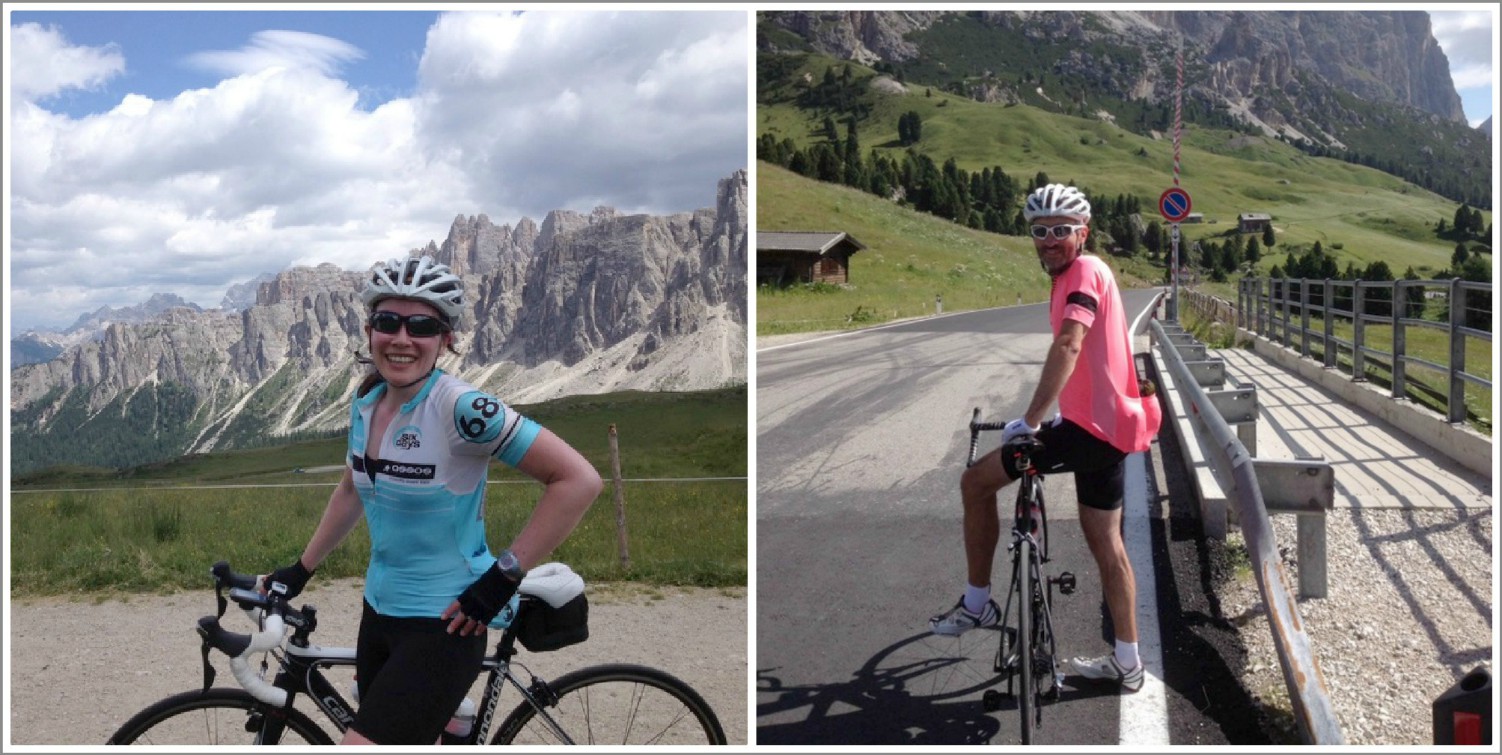 The official route starts in Corvara, taking on Passos Campolongo, Pordoi, Sella and Gardena, returning to Corvara, a second ascent of the Campolongo, on to Passo Giau. Then comes the long but not steep Passo Falzarego, up to Passo Valparola, and finally back to the start in Corvara. However, for our “Maratona day”, we completed the route by starting and finishing at our apartment, near the bottom of the Pordoi.

We set off early, the Pordoi stunning in the early morning sunlight, a wonderful climb with over 30 switchbacks, challenging but not super steep. The morning air was cool as we descended through the trees, but we were soon climbing again into sunshine, as we took the right turn onto the Sella. This is a truly beautiful section of the route, the climb more challenging than the Pordoi, with slightly steeper gradients. Your efforts are rewarded with magnificent views of the Sassolungo.

The descent to the base of the Gardena is not long, and you find yourself on the next climb before you know it.

Taking the Sella Ronda in this direction means the Gardena is climbed from its easier side. The descent to Corvara follows. It is fantastic, with long switchbacks providing superb descending fun, if you like a blast downhill! The village of Colfosco is part way down, before reaching Corvara, ideal for stocking up on water or food. Buying water at the summit of any Passo tends to come with a premium!

Next came the first ascent of Passo Campolongo, we would be hitting that again later as our last climb. The pass is short, only around 5km, but its backdrop is breathtaking and I found myself frequently glancing over my shoulder, to catch another glimpse. We descended into our starting village, Arabba, stopping here to buy water at the local bakery. Our theory of the altitude premium was proven, just 50 cents for 2 litres of water. We have paid up to 5 Euros on certain Passo summits! 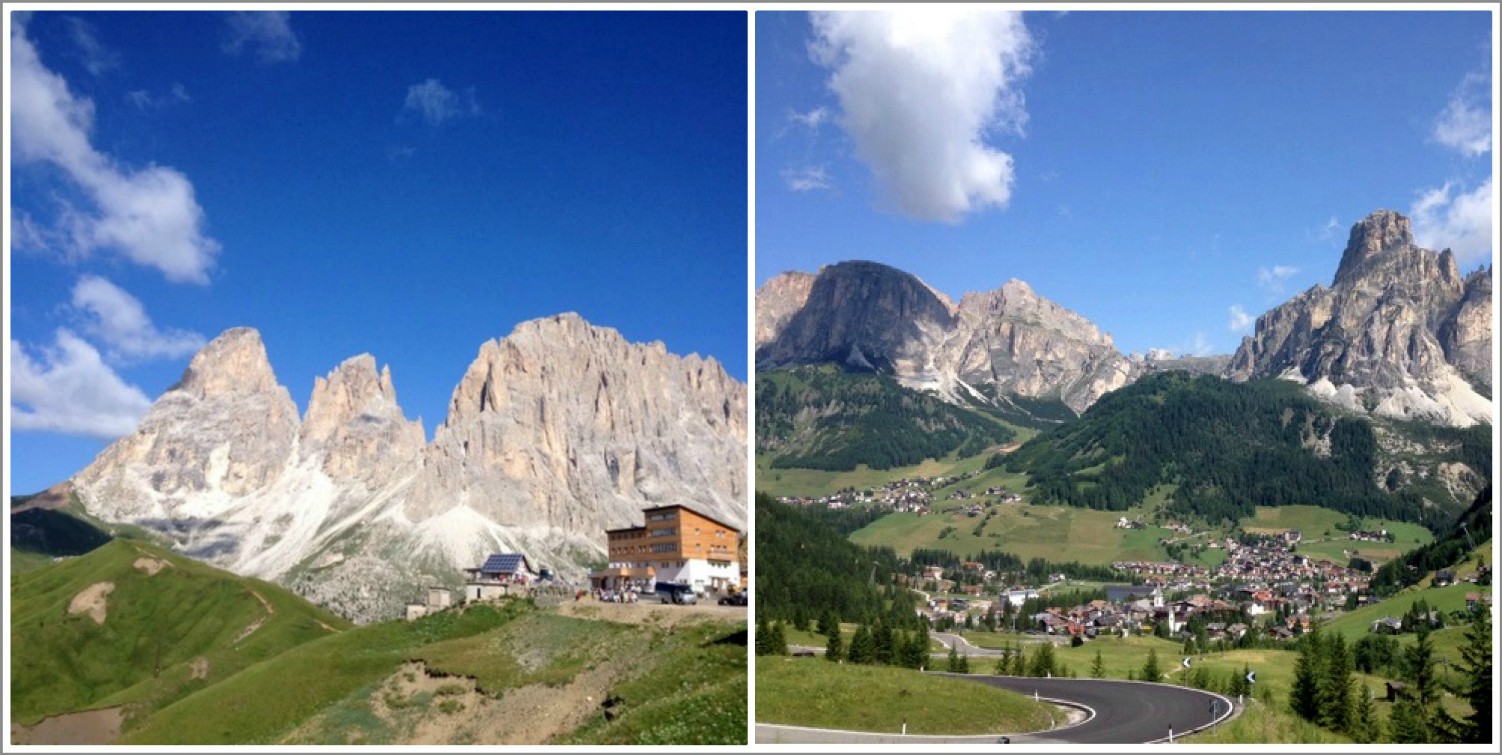 Next comes Passo Giau, the toughest but most spectacular climb on the route, and also my favourite. A beautiful valley road where tall church spires decorate the mountainside takes you to the right turn, where you head to Selva di Cadore, the foot of the Giau. The Giau starts with a real kick, and you’ll need to have gotten your nutrition right, if not, the next 8.5km are likely to be painful! We usually stop for a hot chocolate at the rifugio, it’s deliciously thick and a good motivator to get you to the summit, but on this day we chose not to. It was going to be a long day! We admired the scenery for a short time, it would be foolish not to, with the Gusella so impressive behind the rifugio. The descent to Pocol is quite technical, with varying gradients, and some gravelly sections where road repairs had recently been carried out. Combine that with a large group of slightly insane motor bikers, you certainly have to take care on this descent.

The penultimate climb is the Falzarego, from its longer but shallower side. It was fairly late afternoon by this point, and we agreed to regroup on the plateau before the rifugio at Passo Valparola’s summit. The view is a picture postcard, the panorama stretches out across the Alta Badia region. It is quite a long descent to La Villa, but the surface is good with some newly surfaced sections.

Next was the slight uphill drag back to Corvara. However, we later realised that at this point we should have taken a right turn up to the Muro del Gatto, a final sting in the tail of the official Maratona route, with a leg draining 19% section! Never mind, that’s a climb we will have to save for next time!

We soon reached Corvara, and I was thrilled to be feeling good, even with all those Passos in the legs. Just one more to go, the second ascent of the Campolongo, which gave us no difficulties.

I’d asked Grant to take a photo of me at the summit of each Passo, as a memoir of the day. I was still smiling on Campolongo photo number 2! Just one last descent to Arabba and a short climb to bend 7 of the Pordoi to reach our apartment. I clocked 8 hours riding time, with the Garmin telling us we had ridden 84 miles and tackled over 12900 feet of climbing. A long, but fantastic day!

For information on the official sportive and route go to www.maratona.it, or go to www.stillbiking.com for further writing on our cycling in the Dolomites. 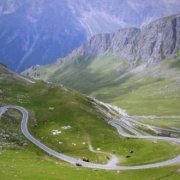 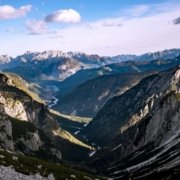 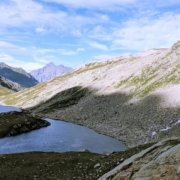