You are here: Home1 / Rotor Q Rings for MTB

When you ride a mountain bike in the north, you take any assistance that you can get on the hills. They’re steep – really steep; great fun coming down, but a real sod to get up at times. Mix that with some loose gravel, slippery mud or damp grass and it makes things really interesting. Then of course you’ve got hills such as Park Rash and Fleet Moss on the roads adjoining – you get the picture.

Q -Rings from Rotor are not wholly new. Some of you will recall the Bio rings of a few years ago; but what Rotor have done is to research and refine things to get what they believe is the ultimate chainring. Question is then: ‘how do they perform off-road?’

Fitting and setting things up was left in the capable hands of our technical editor and fettling guru, Simon. All that was left for me was to jump on board and take them for a spin…or two or three. If you want to test a mountain bike upgrade, there can be no better starting point that Swaledale. The place is full of some of the best and the toughest trails in the Yorkshire Dales, so the Apedale route was an obvious choice; and for round two, the Nidderdale Loop was the trail to test things on. Off we go then.

Those of you who know Swaledale and the Apedale will know that there are some tough climbs to tackle. Not least of which is the testing ascent from the ford at Grovebeck Gill, with loose gravel and steep gradients that fail to ease until they peak at Harkerside Moor. Ordinarily my buddy and I would be side by side on these climbs, but the Q-Rings did actually seem to be giving me an edge that allowed me to keep a flowing spinning action going, biting into the loose surface and ascending with comparative ease – for Swaledale. The ride generally followed a similar pattern, with the pedal action being steady and constant, with no adverse feelings in the calf muscles or elsewhere. There was no discernible knee pain, which can plague me at times, and fatigue wise I felt far better at the end of the ride than I deserved.

The addition of the rings seemed to be working – on to Niderdale then.  A few weeks later the weather and commitments allowed me time to revisit the classic Nidderdale Loop, starting from Dallowgill just to make it more interesting and a better ride. Steady climbs came and went with ease, and some short rocky technical sections came and went in a better gear than usual. In fact, overall the gear changing was smooth and precise, with the rings working well alongside the Shimano XT set-up; and at Twizling Gill where the gradient becomes about 20% off road gravel, the rings did their job, spinning and driving constantly, with the result being an easier ascent that I could have hoped for. On the ascent of Scar House Pasture things remained user friendly, and the overall feeling was of a rhythmic pedal action with no dead spots or adverse spinning action on these testing trails. My acceleration was improved when it was required, with the more efficient pedal action transferring to power when called upon.

It’s early days I know, but the feeling at the moment is that Q-Rings do seem to work well on mountain bike trails, allowing you to keep that necessary drive at crucial moment of the trail. They slip from inner to middle to outer with ease, and seem to allow you a few extra gears to call upon, ensuring a more efficient pedal action – all good news. The quality of the product engineering is not in doubt; they’re extremely well made and well finished. The shape isn’t too extreme to the eye, and as this test seems to show, it serves its purpose. Weight wise, there was no actual difference; after all, I’d be using a set of rings anyway and these rings are made of high grade lightweight materials.

If you live in the Yorkshire area, Fulford Cycles will fit your Q Rings for you. For others, pop along to your local bike shop and get them fitted expertly. 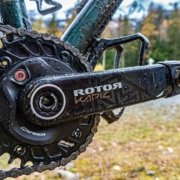 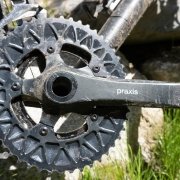 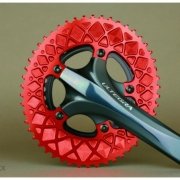 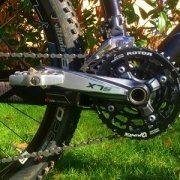